This is the easiest appetizer in the world to make.  For as easy and low-key as it was to make, it was the hit of the night.  It is some hot pepper jelly spooned over cream cheese.  When everyone took a cracker and dipped it into the jelly and cream cheese, there was not a person at our house that didn’t declare that this was delicious.  Why is this always the case?  The food you spend hours preparing is o.k., but the simplest fare, like our hot pepper jelly, is the rage of the evening.

To add insult to injury, I didn’t even make the jelly.  No, it was in a jar and comes from a company named Mrs. Sassard’s in South Carolina, a family run business that has been selling its home-made Southern specialties since 1917.  Now operated out of the family home, the company hopes to expand into larger space and add new equipment, products and a Web site over the next few years.  In addition to the jelly, Mrs. Sassard’s also makes and sells a number of other relishes and preserves, like artichoke relish and pumpkin chip preserves.

For the purists out there, I also have a recipe if you would prefer some homemade hot pepper jelly.

Process bell pepper and hot pepper in a food processor until finely minced.  Combine pepper mixture, vinegar and sugar in a saucepan and bring to a rolling boil.  Remove from heat and add pectin and food coloring.  Pour into sterilized jars and seal according to USDA guidelines for sterilizing jars/lids and canning. 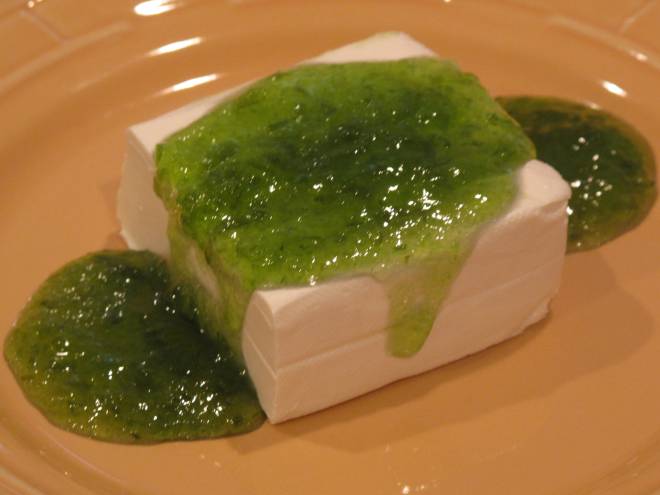 I know this doesn’t look like it would taste so good, but as they say, looks can really deceive.  Whether you track down a bottle of this jelly like I did or make your own, give this hot pepper jelly a chance at your next get together.  The peppery taste with a hint of heat mixed with the creamy texture of the cream cheese on a cracker can’t be beat.  Again, it is also so easy!  Have you ever eaten hot pepper jelly?