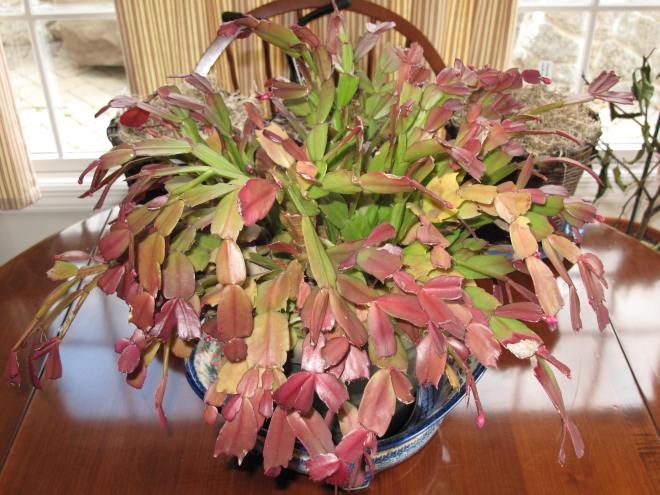 This is my ten-year old Christmas cactus.  I really should say Thanksgiving cactus because for most of its years with me it has bloomed on Thanksgiving and never on Christmas.  This is my own fault and one I am trying to rectify this year.  It’s all in the chilling.  More on that in a second.

My Christmas cactus is from the genus Schlumbergera.  Schlumbergera  is a genus of cactus from the coastal mountains of south-eastern Brazil.  Plants grow on trees or rocks in habitats which are generally shady with high humidity.  Most species of Schlumbergera have stems which resemble leaf-like pads joined one to the other and flowers which appear from areoles at the joints and tips of the stems.  This genus contains the popular house plants known by a variety of names including Christmas Cactus, Thanksgiving Cactus, Crab Cactus and Holiday Cactus.

Over the last several years, I have put my Christmas Cactus in a shady area in my back yard usually in the beginning of June time frame.  Frequent watering and feeding is about all I do to the plant.  In ten years, I have re-potted it into a bigger planter only once.  For me, I like the Christmas Cactus because it needs little care for the most part.  Here is the plant at its regular summer home in my back yard.

In the first weeks of November, when the weather gets much cooler and frost is possible, I have brought the Christmas Cactus indoors and placed it on my kitchen table.  This transition from cool to warmer temperatures has always triggered the plant to begin to grow flowers that then bloom around the Thanksgiving holiday.  I always think, why if this plant blooms at Thanksgiving do we call it a Christmas Cactus?  That’s when I made a chilling decision.

The decision was to keep my Christmas Cactus outside until the beginning of December–one month later than usual.  I’m thinking that the plant’s transition from cool to warmer temperatures is the blooming trigger, so if I delay that transition for one month then I can truly have a “Christmas” Cactus.  So that’s what I did and my plant came indoors on Saturday.  As a precaution, I did cover the plant up on extremely cold nights or nights when a heavy frost was predicted.  Here is my plant when under the covers.

While the plant looks healthy and nothing appears to have perished due to the extra month of cold weather conditions, I think that the next few days of the plant being in the house will determine its fate.  It will either make it and begin to bloom in the next few weeks or it could also shrivel up and leave us because of the additional cold it has endured over the last month.  Keep your fingers crossed with me–let’s hope it transitions without a hitch. 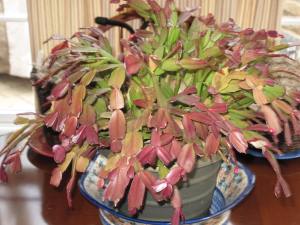