This is another edition of Friday Dance Party on Acorns On Glen.  It’s the time where we give thanks for another week of living.  We give thanks for making it through and for being able to celebrate this fact.  How do we celebrate another week of living?  We dance.  So take a moment and be proud of the fact that you’re here and you’ve made it to another Friday.  Not only you, but your family and friends as well.  So, to that end, are you alive this Friday?  Have you given thanks for this? 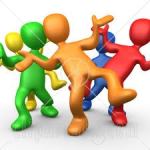 Every Summer has its own song.  You know, that one song that speaks for that one particular Summer season.  When you hear it, you immediately identify it with what you did that certain Summer, where you went on vacation that certain Summer, who you were dating, what you were drinking, etc.  I was reading Billboard.com and actually found a list of the top songs of Summer by year.  Reading through the list brought back memories and also made me realize that I’m not getting any younger.  The songs were ranked on each track’s performance on the Billboard Hot 100 chart during the Summer.  So here’s the list for the last ten years, just to refresh your memory:

So what will be the song of Summer 2011?  I am putting my vote in now for ‘Last Friday Night’ by Katy Perry.  Yes, this would give her three Summer titles, but this song is what Summer is all about.  Letting go and having some fun.  She also has quite the cast of characters in this video, including Kenny G.  What can be bad about that?  So enjoy the rest of your Summer and let loose to this little T.G.I.F. goodie.  You made it through another week and deserve to celebrate.  Does anyone even wear retainers like this anymore?  What do you think the song of Summer 2011 will be?