We’ve had such weird weather here in Connecticut over the last year or so.  I know I’m not writing anything new here as so many gardening blogs that I read on a frequent basis discuss strange weather as well.  However, the strange weather does cause some plants to die off as a result.  During the freak snowstorm last October near Halloween, several bushes and small trees in my garden split under the weight of the snow and, sadly, I was unable to save several of them no matter how hard I tried.  After removing the dead plants and looking at the holes their vacancy left, I have replaced many of the areas with new plants.  In some cases just a replacement of what was there and in other cases I have replaced the area with plants that are new to my garden and new to me.  I guess I’m just trying to mix it up a little since I’ve been given the chance to do so.  Above is a close up of one of my new plants–a witch hazel bush or Hamamelis, as it is called in botanical Latin.  For my Hamamelis, I have chosen an intermediate hybrid called ‘Jelena’ with copper-colored, scented flowers that look like little streamers.  The flowers appear in very early Spring and then the green leaves above turn into beautiful orange/red foliage in the Fall.  ‘Jelena’ being an intermediate hybrid, or x intermedia, means that ‘Jelena’ is a child of two parents:  the Chinese witch hazel (Hamamelis mollis) and the Japanese species (H. japonica).

I probably would have never purchased a witch hazel bush for my garden five years ago.  Even though I had never really looked closely at one, just the name alone was a turn-off to me.  Then I had the opportunity to see one that was blooming in early Spring of 2011 and decided that I needed one for my garden.  The streamer-like blooms so early in the Spring are quite a look and one that I wanted in my neck of the woods.  I’m just sad that the way it came into my garden was because something else had died and needed to be taken out…..I guess that’s just the way Mother Nature works it. 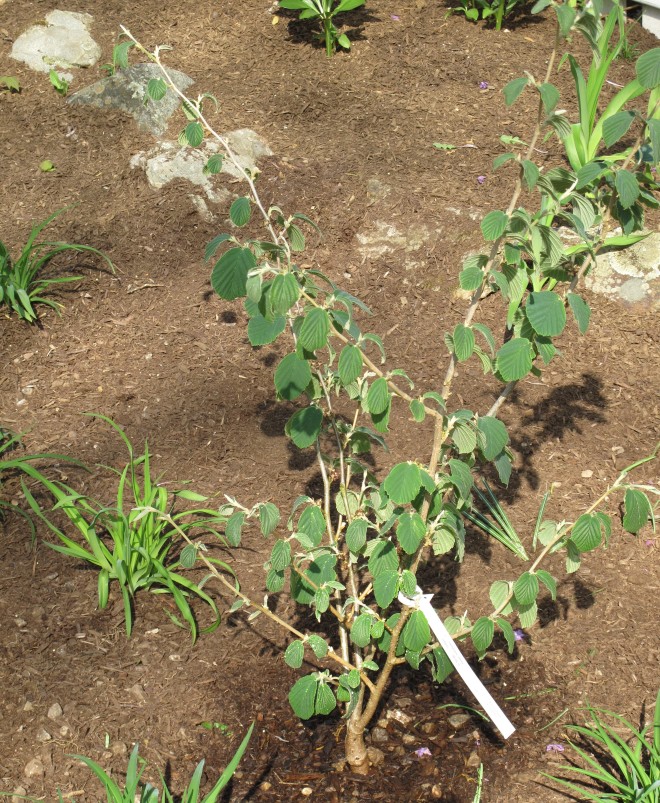