There is a beauty salon in town that is advertising back to school haircuts.  It was these ads that made me decide to perform a few haircuts in my back yard.  Namely, my two weeping cherry trees and my Rose of Sharon bushes.  They had simply gotten out of control.  They were too tall and too bushy.  I decided since all of them had done their thing for the season, now was as good as time as any to give them a little makeover.  The picture above is the final result.  Two trees that fit better into their small garden spot and Rose of Sharon bushes in between the trees that are more orderly and compact.  I also used this time to trim down my hydrangea plants, which had gotten too big over the last few years as well. 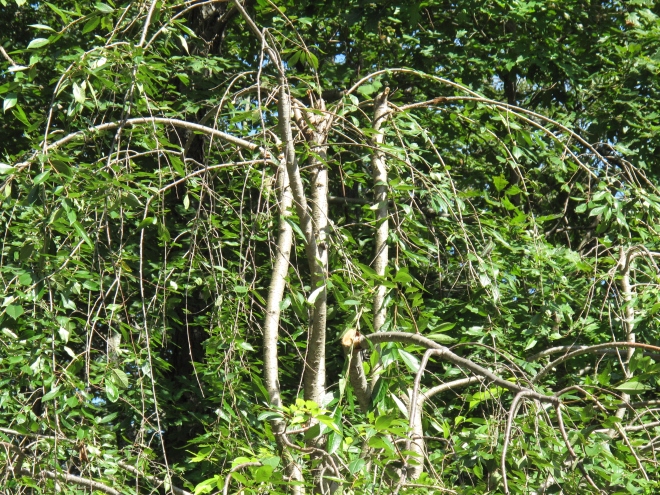 My haircutting team started with reducing the heighth of each tree.  This meant literally cutting the top four feet off of any branch that grew straight up towards the sun.  Each tree had about 8 – 10 vertical branches that needed cutting.  After taking care of the height problem, each tree looked much shorter and fit better into their small garden spot in the back yard.  Liking what I saw, I then applied the same cutting plan to the Rose of Sharon bushes and made them much shorter as well.

Making the trees appear less bushy was a matter of finding the ends of the branches that hung out the furthest and snipping them off close to where they connected to the main trunk.  My guess is that snipping branch by branch took about 2 feet out of the width of the trees.  The Rose of Sharon didn’t need much pruning to reduce their width.  In this cluster of bushes, only about three or four branches were trimmed.  The last step with the trees was to make sure all of the hanging (weeping) branches were cut so they had a proper distance between them and the ground.  After making sure each branch was hanging at the same level as all of the rest of the branches, it was time to tidy up the hydrangea.

With the hydrangea, it was important for me to make sure none of the branches were laying on the ground or, as some of the branches had done, were hanging over the stone wall.  I also wanted to make sure there was ample room between them and the hosta plant that grows between my two clusters of hydrangea.  Based on my research, these mophead hydrangea (H. macrophylla) need to be trimmed and cut after they have bloomed, but before they have set their buds for next year in the tips of year-old wood.  I felt that now was the perfect trimming time and I made sure to be a little aggressive and really clean them up. 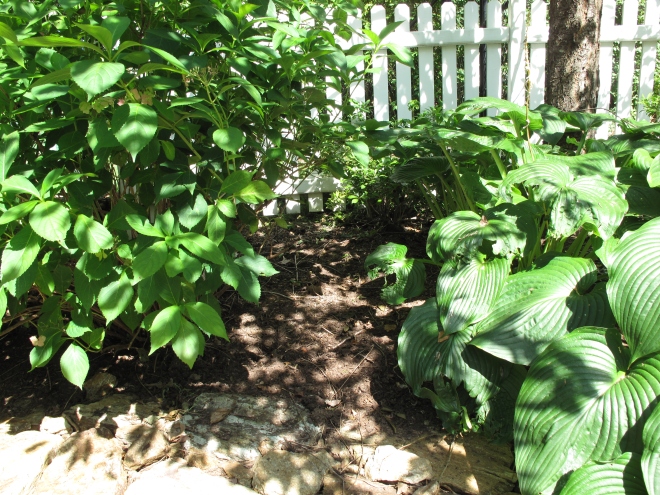 I may have gone a little overboard in trimming up my mopheads, but I was so happy to see my giant leaf hosta take center stage between both clusters of hydrangea.  I had forgotten how beautiful the hosta was because the vast majority of it has been hidden behind hydrangea stems for quite a few years.  After I was done trimming the hydrangea, I was quite happy with the results.  I think I trimmed them at the right time, there were no stems or leaves on the ground or over the side of the stone wall and there was adequate space between them and other plants.  All in all, mission accomplished.  I gave what I think were some pretty good haircuts and I didn’t even need to go to beauty school. 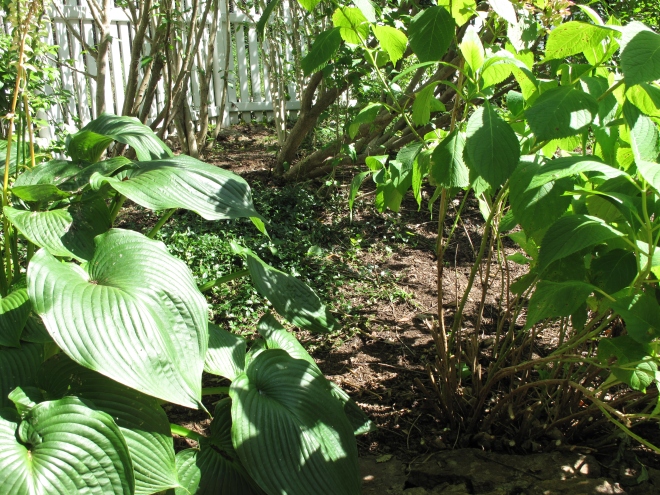 2 thoughts on “Back To School Haircuts”