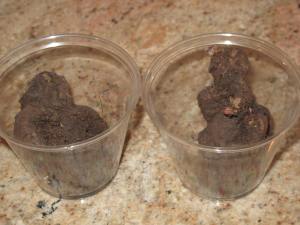 This is a set of begonia tubers. More specifically, they are a set of Blackmore and Langdon begonia tubers.  For over 100 years, Blackmore and Langdon have offered tuberous begonias that produce spectacular flowers in a wide range of colors over a very long season and do all of this in shade.  In the North where I live, the tubers should be started indoors in late Winter or early Spring to bloom by Summer.  They need well-drained soil, indirect light and moderate temperatures.  While not as popular as the wax begonias that are planted more in beds, tuberous begonias are more spectacular and are most commonly planted in containers or boxes.

Its scientific name, Begonia tuberhybrida, means they grow from a tuber (similar to a bulb) and its many varieties are hybrids.  As is often the case with hybrids, there are different varieties.  The tuberous begonia flowers come in all shapes, sizes and colors.  Some flowers are upright, while others loosely hang down.  Some are single petaled, others, probably most, are double petaled.  The male flowers tend to be quite large, up to 6 inches in diameter, and showy.  The female flowers are smaller, 1 to 3 inches in diameter, but still showy.  About the only common factor among the varieties are the leaves, which are almost always dark green in color, quite large and arrow shaped.

I have had these two begonia tubers for quite some time.  I purchased both tubers from White Flower Farm, http://www.whiteflowerfarm.com.  The ‘Picotee’ tuber has been growing in a pot on my porch for over eight years.  The ‘John Smith’ tuber has been around since 2008.  When the plants die off in October, I simply dig the tubers out of the soil, break the spent stems from the tubers and then place them in the basement in wood chips until they are ready to plant again in mid-March.

‘Picotee’ has a salmon colored double bloom.  It grows almost a foot tall each year and produces a number of massive sized blooms.  It does not produce scent of any kind.

‘John Smith’ has double, rosebud blossoms that are ruffled in a delicate peach color.  It has the distinction of being the first scented upright begonia. Its fragrance varies from rose-like to a hint of citrus.  The creation of the first perfumed, upright begonia took time, more than ten years.  It was named to honor Blackmore and Langdon’s lead begonia grower, who bred and developed this breakthrough.  ‘John Smith’ was a highlight of the Royal Horticultural Society’s Chelsea Garden Show in 2007.

Every mid-March, I bring my tubers up from the basement and plant them.  I start with 6-to-7″ pots.  I fill each pot about two-thirds full of organic potting soil and place one tuber into each pot’s soil.  It is important to put the tuber’s concave side facing up.  Notice the small buds that appear on the tuber.  This is the year’s new growth. 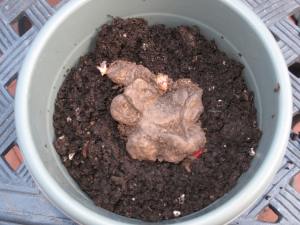 I fill the rest of the pots to the rim with more soil.  Throughout the growing season, I transplant the begonias to bigger pots as the plants grow larger and larger. 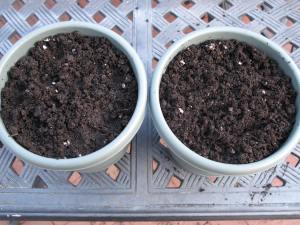 To see details on the complete planting process for a tuberous begonia, here is a short video from the growers at White Flower Farm:

I’ll keep you posted on their journey throughout this year.  They have been such a beautiful addition to my front porch for so many years, I really can’t picture my porch without them.  If you have the time and the money (the tubers are not cheap), I encourage you to give Blackmore and Langdon tuberous begonias a try.  You’ll be glad you did.  Do you grow any spectacular plants in your garden that you would like to share on Acorns On Glen?

2 thoughts on “Time For Tuberous Begonias”