This is a Summer update to some of the stories we have posted earlier this year on Acorns On Glen.  Can you believe it is the middle of July?  It doesn’t seem possible until you go outside and the hot sun beats down on you while you are gardening or messing around on the patio.  Time goes so fast.  I am remembering a saying that seems to hold some truth for us this year–the older you get, the faster time flies.  That sums up 2011 so far for us even though I am not admitting to getting any older.  On Sunday, we posted a virtual garden tour on what was blooming in our garden.  While we were walking around the garden, there were so many times we stopped and remembered that we had done a post on a certain flower or a certain plant earlier in the year.  So we came up with the idea of doing a post to show what has happened since we first posted the original garden or everyday life story all those months, weeks or days ago.  Some of the stories show progress and some show a different picture.  In the spirit of open and honest communication, we are going to share the good with the bad.  It’s what’s going on at Glen Road….warts and all!

In June, we posted an article entitled “Another Post About Legal Pot“.  We thought the title was funny as the post was about potting plants that we had purchased from White Flower Farm and not about the happy weed that most people would think about when they read the title.  Can you believe that it is one of our most visited posts?  We get it, it’s not the gripping story that unfolded, but the provocative title.  In our story, we show two collections of annuals that we received and planted in pots around our pool.  At the time we wrote the post, the pots looked pretty empty with the little plants placed in them.  Here are the pictures that showed the planting of the ‘Sunny Summer Annual Collection’ and the ‘King Tut Annual Collection’.  Pretty meager to say the least. 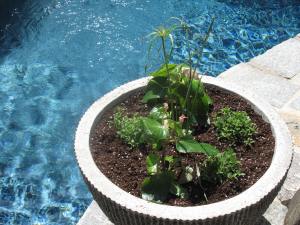 Well, we hoped in our post that our two collections would take root and grow and grow they did.  We have been lucky to have some long spells of sun interrupted by a few days of rain and this has been the perfect trick to grow our two collections into some impressive potted displays.  Here are the same two pots still sitting around the pool, but look at how well the plants have filled in. 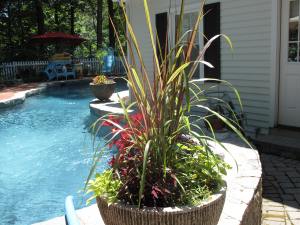 Sometimes your best intentions in the garden turn out to be disappointments.  Take our story in April on Grace Kelly coming to see us on Glen Road in the post entitled ‘Grace Kelly Moves To Glen Road‘.  If Grace Kelly visited or moved in that would be news to us because we missed it.  Our post was about a tree rose where a Grace Kelly rose bush was fused to a tree trunk and the small tree would bloom with Grace Kelly roses all Summer.  Here are a few shots of the tree rose that we planted and placed on our patio.  So full of potential at the time! 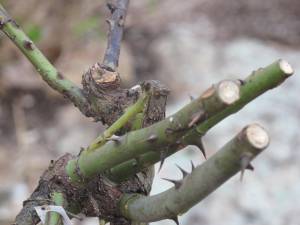 So to be honest, things looked great at the beginning of Grace’s growth.  She pushed out a few leaves on the top branches and hopes were high.  Then she just stopped, dried up and died…or so we thought.  At about the time we were ready to give Grace and her soil a final resting place in our compost pile, we noticed that she decided to change her mind and grow from the bottom of the container and not from the top of the branch like she was supposed to do.  So we have left Grace in her same spot to see what she produces from the rose branch that is growing from the base of the pot.  Do you think we will get a pretty pink rose by the time Fall comes to visit?  Look hard at the base of the pot and you can see the spindly little rose branch growing. 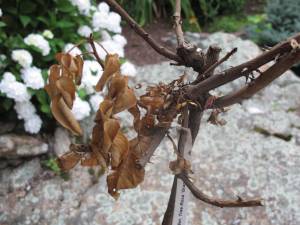 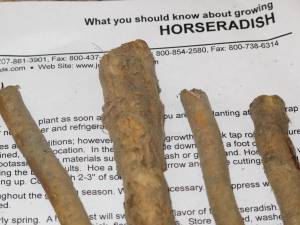 Needless to say our horseradish patch is now a nice little track of dirt and mud.  Did the plants just pack up and leave?  Maybe they didn’t want to live by the sweet and sour goodness of the rhubarb?  Whatever the reason, our horseradish struck out while our rhubarb hit a home run this season.

There are even updates from our post on Sunday ‘What’s Blooming – Another Virtual Garden Tour‘.  In that post, we talked about our best garden buy ever, which were the long-blooming day lilies from QVC.  Well since that post where we showed two blooming varieties, a third one has opened its buds to display a brownish bloom that will last for a couple of months.  Maybe it’s the child of the original yellow variety and the coral variety that we showed you on Sunday.  Remember them? 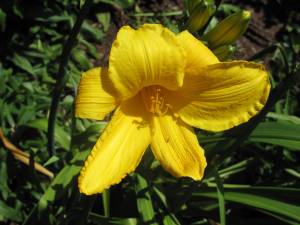 We are not sure we remember this variety from previous years.  Can that be possible that it just came out of no where?  Doubtful, but stranger things have happened in our garden.  Again, notice the almost brown color of the petals.  As well, the dark purple middle is a killer.  So gorgeous and, best yet, long lasting.

Remember this little stunner from our trip to Christie’s auction house in June in our post ‘Lots Of Bling – Christie’s Important Jewels‘? 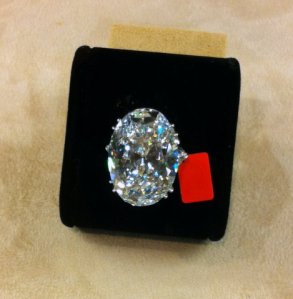 This little diamond ring set with an oval-cut diamond, weighing approximately 46.51 carats, flanked on either side by a pear-shaped diamond, weighing approximately 1.01 carats, mounted in platinum was estimated to go for anywhere from $2,500,000 to $3,500,000 in auction.  Guess what the final bid price was when the dust settled at the auction?  $4,226,500!!  A steal (or to steal it is the only way we would ever be able to own such a gorgeous diamond!).

Lastly, we had made a smart little comment about our Asiatic lilliums being some of the first flowers we planted at Glen Road and, while we were excited that they came back year after year, they were not the most vivid colors we had ever seen.  We tried to get out of putting them down by saying we weren’t the most vivid color either after six years on Glen Road, but it didn’t work.  Here is what we snapped on Sunday in ‘What’s Blooming – Another Virtual Garden Tour‘.

Well this morning on a little garden stroll, another Asiatic lillium had shown its face.  Guess what?  The blooms match our embarrassed faces.  How dare we make fun of our lillium tribe.  Our new bloomer is a dark red.  We may be less than vivid in our six years here on Glen Road, but don’t bring the lilliums down.  They are a diverse nation if we have ever seen one.

So we hope you enjoyed our little update of what’s been going on here at Glen Road.  The garden and everyday life are amazing and fun things.  With every great story, there is another one where things just didn’t go exactly as planned.  That’s life!  Well, for all our less than stellar performances, we guess there is always next year…or the year after….or the year after.  You get our drift.  What good or crazy things have been going on for you this Summer?

4 thoughts on “Summer Update….Warts And All”