To be honest about it, when I realized that my original garden was not growing very well because the plots were not getting enough sun, I was filled with many emotions.  There was disappointment and sadness because I had worked so hard to grow all of the plants from seeds under my grow light and so to see them struggling to live was hard.  Anger was present, of course.  How could I be so stupid and not realize that the sun was not going to shine through the surrounding trees once they were filled with leaves?  The money part weighed on me as well.  It wasn’t cheap to build four beds with nice gravel between them and then surround the plots with a secure fence to keep assorted critters out.  At the end of the 2011 gardening season, I thought it was over for my garden sanctuary.  It was time to dismantle the whole thing and just give up.

Over the Winter and into the beginning of the 2012 gardening season, I took some time to think about what, if anything, would grow and prosper in the area.  I came up with a list of crops that thrived in early Spring and actually would be harvested before the trees surrounding the old garden would be full of leaves.  I decided to not give up on the garden, but try planting three of the four plots with early providers–namely, a large plot of asparagus, another plot of horseradish and, last but not least, a third plot of rhubarb.

With these three groups of plantings, I am hoping to allow them to start growing in very early Spring when the surrounding trees are leaf-less.  The three groups are some of the earliest plants to show their faces (or leaves) when Spring has just barely arrived.  I also hope to get a few spears of asparagus, some off-white roots of horseradish to grind and some stalks of tangy rhubarb and be done with the plants by the time Spring has fully sprung and the area becomes more shaded.  At that point, the plants can continue to grow, but their best performance will be behind them.

At this point, the plants in the three plots are in their first year of growth.  While they seem to be growing and multiplying, it is too early to make a call if they are going to make it in the coming years and produce enough asparagus, horseradish and rhubarb for us to eat.  It’s better than nothing, right?  Keep your fingers crossed.  As well, I still have one plot left and empty.  Any ideas on something similar that I can put in my last plot of garden? 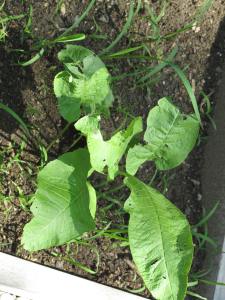 4 thoughts on “You Can Teach An Old Garden New Tricks”