This is a post from Acorns On Glen’s first guest blogger.  When I saw the pictures of the 7th birthday party my friend did for her daughter, I knew that all of you needed to see and read the complete story.  My friend and her sister are both from Iowa,  just like me, and we’ve been friends for almost 25 years.  They both grew up with very creative parents and my friends learned a lot from them.  Their mother was a woman who had a small business creating and baking custom cakes and was such a good cook that she published her own cookbook.  Their father (who is 90 this year) still works in wood working and construction.  So my friends learned many of their techniques from their parents and continue to improve on their skills from classes, reading and lots of practice….from cooking and baking, to sewing, to construction, decorating and design, my friends are not “crafty”, but rather, they are true artists.   See more of their incredible work at www.peoniesfromheaven.net.  Enough from me…let’s turn it over to Acorns On Glen’s first guest blogger…

The inspiration for my daughter’s birthday was an excess of adorable toadstool and fairy fabric that I had in my stash.  I thought – 7 year old girls, toadstools and fairies – perfect.  My first task was to work on the invitations that amounted to 21 toadstool and fairy aprons along with a recipe for a perfect birthday.  Here is what the “recipe” invitations said:

Recipe:  A Toadstool Tea and Pottery Painting Party for A 7th Birthday

A Toadstool Tea is a secret party for all the fairies, elves and imps to celebrate the Fairy Queen’s birthday.  It takes place under the thicket deep in the middle of the forest.  Since we don’t have a forest where we live, we will substitute our big party room instead.  We will do our best to make it look like a forest.

Serves:  A Bunch of Fun

A heaping cup of You

A scant cup of giggles

A pinch of creativity

A dash of a sweet tooth

Directions:  Arrive for 2 hours of pottery painting and a Toadstool Tea.  Bring the enclosed fairy or toadstool apron so you don’t get paint on your fairy clothes.  I am also enclosing a magic token that you can use for the carousel.  If you close your eyes and wish really hard, the magical animals on the carousel will transport you to a secret fairy land.

Here is a picture of the finished product.  I embroidered each apron with the fairy princess’s name with the “recipe” invitations and carousel tokens tucked inside. 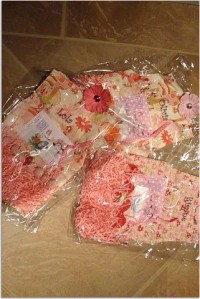 While I was working on the aprons, I asked my daughter to design her cake, so I could scratch one other item off my list.  Here is what she designed: 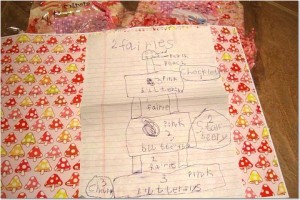 The rest was up to me.  With the invitations out the door, I began making the bling for the cake.  I made the fairies out of gum paste.  The fairies were formed in a silicone mold, frozen, dried and then hand painted and glittered for that extra magical touch. 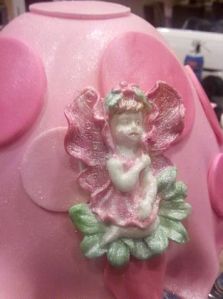 I used the Cake Cricut that my friend sent me for Christmas to make all of the butterflies.  I do have to admit the finished product was beautiful, but getting there took a lot of patience.  It is very difficult to find the right medium for the Cake Cricut.  I tried the sheets that are sold with the Cake Cricut – most of the sheets were brittle and the butterflies I did get out of the Cake Cricut sheets never dried so some of them ended up breaking.  I then tried gum paste and had a little better luck.  I was able to get the name banner and a couple more butterflies, but I need more practice or a better medium to use with the machine. 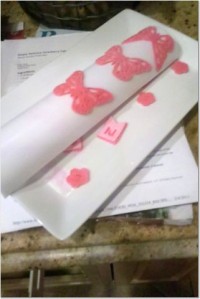 All of the cakes were baked and frozen just waiting for the pounds of butter cream and pink marshmallow fondant.  I have to admit I messed up on the layers of the cake flavors based on my daughter’s original design, but I did get final approval from my little designer.  PHEW – crisis averted.  Chocolate for the bottom layer, super sweet strawberry for the middle layer and cherry for the top layer.  I love making the cherry cake as this was the first cake my mother ever made for my dad and I think I have had it as part of my daughter’s cake for at least 2 or 3 years – a great family tradition as my mother was an incredible baker and cake decorator. 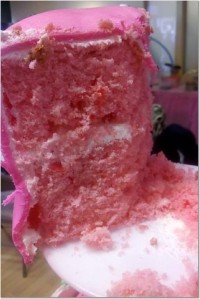 My sister arrived just in time to whip up the butter cream and crumb coat the cakes.  I even had my hubby get involved with the fondant.  Kneading the marshmallow fondant takes some big strong hands, so I always save this task for him.  He may have grumbled a bit, but he obliged.  My sister and I were up to our elbows in butter cream. 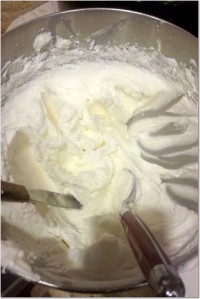 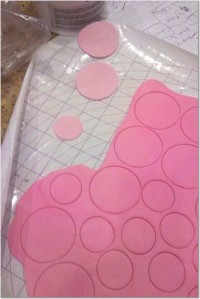 The toadstool on the top on the cake was formed from rice krispie treats and then covered in marshmallow fondant.  I trimmed the edges with scissors.  My sister and I liked the drapiness of the toadstool, so my sister placed champagne glasses under the edges to make them dry in a very whimsical fashion – SO CUTE.

I had ordered some wheat grass for the bottom layer, because what is a toadstool without grass?  We transported the cake and assembled it and, WA LAH, here it the finished product. 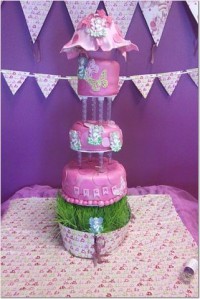 It was a fantastic 7th birthday and a good time was had by all.  Do you have whimsical toadstools in your garden?

6 thoughts on “A Toadstool Birthday Tea”